Recently there has been a lack of updates to my blog and that has been for a good reason. The reason being that I haven’t really done anything at all the last few days. All I have done is spend time in the hostel in Dunedin, chilling out, drawing and watching far too many movies. 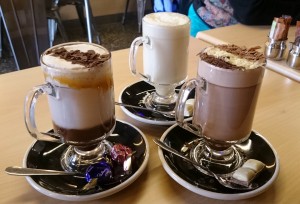 The hostel here is pretty comfy atmosphere that I suppose could even be considered too comfy at times. The massive sofa’s, warm fire and friendly company tend to make sitting down and not doing  anything come quite naturally. I would say that I have probably watched more movies in the last 2 weeks than I have for the rest of the year put together. The lazy mood has probably been exasperated by the fact that it has been pretty cold here the last few days, snowing a few times which can make it a bit bleak. Today though we actually managed to get out for the day and do a little

Dunedin is home to New Zealands Cadburys chocolate factory that produces chocolate for the whole of New Zealand, Australia and most of the souther hemisphere. A few of the people from the hostel 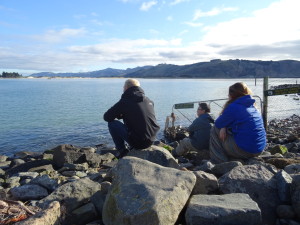 decided to head there today since it is only about 5 mins walk from the hostel so we headed over and took to tour. To be honest there wasn’t an amazing amount of stuff to see at the factory as most of the things happens inside big machines or with robotic arms but it was certainly something to do for an hour or so. The one cool thing that we did see was that inside one of the silos they have a huge chocolate fountain, 5 stories high! When inside we got to watch it dump 1 ton of chocolate straight down, splashing its way through multiple gates on its way to the bottom. It is a shame I couldn’t get any pictures of it but unfortunately they have a policy of no cameras or other devices inside the factory so not a chance to get any.

In the afternoon we decided to head out of the

hostel for once in our lives and go across to the Otago Peninsula to take in some of the sights of the sea and the view of the beautiful countryside around us. It is easy to forget how beautiful the countryside around Dunedin can be when you spend so long in the centre of the town without any transport apart from your feet. Within 15 mins drive we were out of the centre and had an amazing view of the bay all the way until we hit the sea. I only managed to get some pics when we stopped but the whole time the view was amazing.

I think I probably need to start writing articles more often, even if they are boring and don’t contain much to at least keep up with the flow of things so I don’t end up with mish-mashed information, throwing things together. For not though that is all you are going to get, with a chunk of random images thrown into the mix from exploring some graffiti around Dunedin to Craig randomly playing the guitar in the hostel. Hopefully even without too much context they are still not too bad pics!

One Reply to “Daniel and the Chocolate factory”